No Money for Frontex

The EU border agency Frontex wants to obscure its dubious work. But with transparency activism, the public can shine a light on human rights violations at the EU's borders. 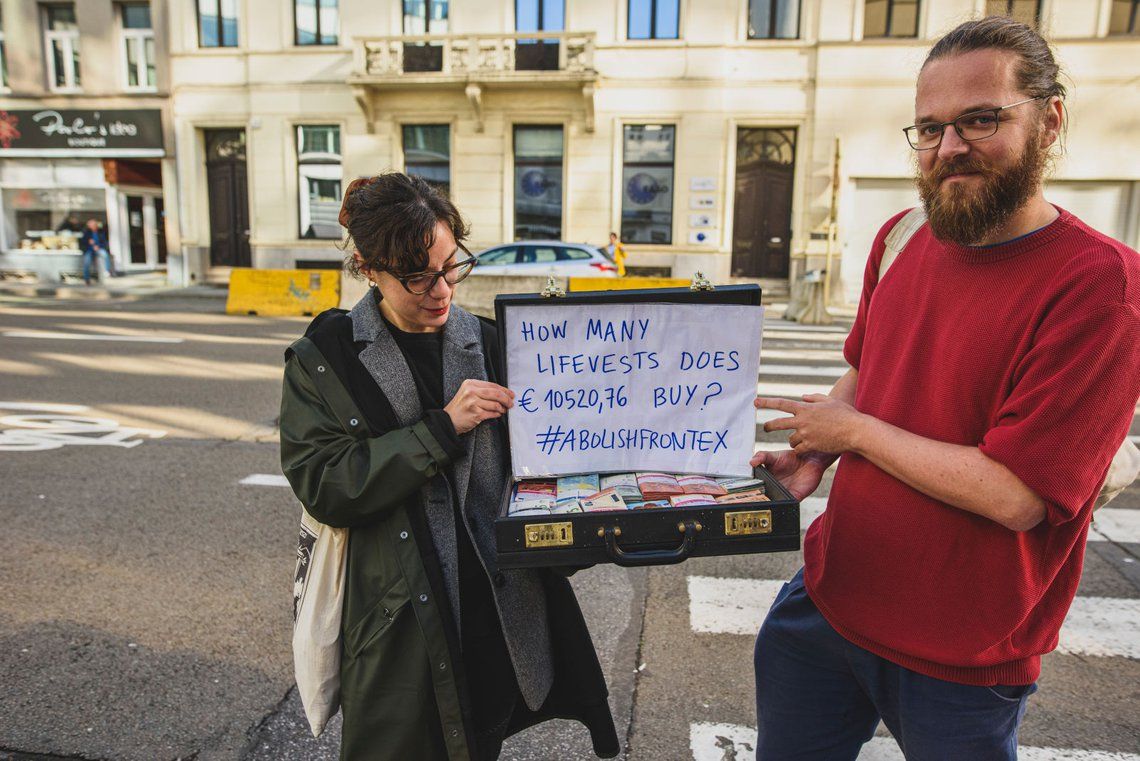 In the history of the European Union, there is no other public agency that has grown as extensively as the EU border police Frontex. Frontex’s unparalleled accumulation of money and power in recent years has not come with adequate public oversight. While in the future, Frontex officers will carry weapons at the EU borders and Frontex drones will record all parts of the Mediterranean, Members of Parliament, journalists and NGO activists find it difficult to find out what exactly Frontex is doing throughout the EU (and how they are complicit in human rights violations).

However, since 2020, Frontex has, for the first time since its foundation, experienced serious public, political and judicial scrutiny. It has also, for the first time, faced some accountability for its wrongdoing, including a prolonged block to its budget approval, the resignation of its long-time Executive Director Fabrice Leggeri, and what the agency considers a serious reputational crisis: a substantial increase of critical awareness among the public.

At FragDenStaat, our goal is to enable the public to challenge Frontex’s power by forcing the agency to become more transparent. We are strategically using the EU’s Freedom of Information law to scrutinise Frontex’s work, using information requests, lawsuits and co-operation with other NGOs and journalists.

Freedom of information requests, open-source intelligence (OSINT) and leaks have been deployed as complementary tactics by a variety of journalistic and civil society actors, successfully dragging Frontex into the spotlight and exposing serious and widespread wrongdoing. Increased availability of information around Frontex has, in turn, increased awareness, catalysed the expansion of critical discourse and resistance against the agency, and led to the activation of political and legal accountability mechanisms.

Our transparency lawsuit against Frontex that we launched in 2018 has contributed to establishing the narrative of Frontex operating outside of public control and lacking transparency. While this lawsuit for information about the agency’s vessels in the central Mediterranean was not successful in court, it was successful out of court.

The agency’s headless attack on FragDenStaat contributed to this: after winning against us in court, Frontex tried to make sure that it would not be sued in court again. It tried to recover lawyers’ costs of around €24,000 from us, despite the European Parliament demanding twice that they withdraw their intimidating invoice.

When we didn’t pay the excessive money demand, Frontex went to court against us. The court ordered Frontex to lower its demand to around €10,000 and made it clear that Frontex had massively exaggerated its expenditure. Since Frontex went ahead with collecting that money from us, we decided that Frontex would have to face us in public. And off we went, trying to pay Frontex in person and in cash at its Brussels office.

But our action quickly showed that while Frontex is a fan of using intimidation tactics on others, they themselves are easily intimidated by having to meet the public. Upon our arrival in Brussels, Frontex evacuated its liaison office, leaving no one behind to collect the money from us.

And Frontex didn’t reach its goal of deterring us from not suing them again. Because in 2022, alongside Sea-Watch, we sued Frontex for refusing to release documents detailing its working relations with the so-called Libyan coast guard.

FragDenStaat plays a central role in ensuring that Frontex’s unchecked power is held to account by civil society. Ultimately, Frontex and the EU care less about the costs of legal challenges and more about silencing their critics. FragDenStaat exists to counter this silencing and to speak out loudly against the opacity of EU border control.

About the Author: Arne Semsrott works at the Open Knowledge Foundation on the Freedom of Information Portal FragDenStaat.de. This portal enables interested citizens to request information from a variety of public sector organisations.